Evidence based decision making builds the case for the preferred solution 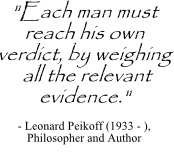 What should be the goal of evidence based decision making? What does the ideal decision look like? When has the preferred option been made crystal clear?

One possibility: Given the information available and accessible, and presented with the same evidence, all involved would come to the same conclusion. The evidence, in essence, makes the decision. The decision evidence predicts the choice that will deliver the best result.

Decision making can be considered making a causal argument, for yourself or others, that a chosen alternative will deliver a preferred outcome. Choices set a course for future outcomes. The essence of a decision can be represented as, "If I choose A (a specific alternative) then B (a specific desired outcome and its consequences) will occur." The underlying belief is that our choice will cause, in whole or in part, the desired result in the future.

Evidence based decision making provides information that supports this causal argument. It supplies information to establish the likelihood or predictability of the desired outcome based on what we choose. In theory, the evidence should increase our level of confidence in achieving the preferred results.

Types of evidence that improve predictability

Relevance, a common legal term, is fundamental to any evidence used in making a decision. In the context of the causal argument, relevance indicates that the information presented will help influence or change the view of the likelihood to fulfill decision success criteria. If it isn't relevant, it is adding noise to the decision making process and contributing to information overload.

Evidence based decision making uses relevant information to make it clear why a specific choice is being made. Better evidence will help increase likelihood of meeting decision goals by revealing risks that can be alleviated with actions taken during decision implementation.

Often a decision is made, and then evidence is found to justify the choice. This can create a number of problems, particularly when it occurs as part of a group decision making process. For example:

Formal evidence based decision making may not always provide the insight to improve effectiveness. In these cases, decision makers must have the strength to trust informal evidence that comes from experience, intuition, and consultation, and avoid manufacturing evidence. 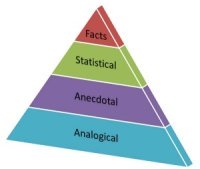 Climbing the evidence hierarchy increases the predictive power of the decision. Also, moving from subjective to objective data can increase the reliability of the evidence, increasing likelihood of success.

Gathering evidence will typically cause refinement and/or identification of missing criteria, helping to add clarity to the needs/desires triggering the decision. This will often include identification of factors to minimize or prevent when gathered evidence suggests potential long term negative consequences that might not have been considered.

Causality is more easily proved in the physical sciences where it is possible to develop experiments that can eliminate the influence of confounding variables (hidden variables that can lead to an erroneous conclusion of a causal relationship). Even Newton's law of universal gravitation was superseded by Einstein's theory of relativity when his law was found to not to be predictive for certain circumstances.

Life is still uncertain, but evidence based decision making creates knowledge that increases the likelihood of achieving desired outcomes. Sounds like a worthy goal for the decision making process...