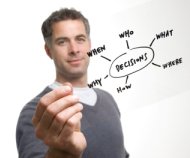 We have put together a collection of thought provoking decision quotes for your education, inspiration, and enjoyment. In addition to decision quotes, we have included important quotes and famous quotes for related topics (e.g., Innovation, Business, Decision Mistakes, ...). On this page, we will give you a few examples of quotes in various categories and then give you a link to additional quotes within that category.

"It is change, continuing change, inevitable change, that is the dominant factor in society today. No sensible decision can be made any longer without taking into account not only the world as it is, but the world as it will be." - Isaac Asimov (1920 - 1992), Science Fiction Author

"The possible solutions to a given problem emerge as the leaves of a tree, each node representing a point of deliberation and decision." - Niklaus Wirth (1934 - ), Programming language designer

"Learning and innovation go hand in hand. The arrogance of success is to think that what you did yesterday will be sufficient for tomorrow." - William G. Pollard (1911 - 1989), American Physicist

"Innovation distinguishes between a leader and a follower." - Steve Jobs (1955 - ), Co-founder of Apple

"You have all the reason in the world to achieve your grandest dreams. Imagination plus innovation equals realization." - Denis Waitley (1933 - ), American Author

"This is as true in everyday life as it is in battle: we are given one life and the decision is ours whether to wait for circumstances to make up our mind, or whether to act, and in acting, to live." - Omar N. Bradley (1893 - 1981), World War II Army General

"The most difficult thing is the decision to act, the rest is merely tenacity. The fears are paper tigers. You can do anything you decide to do. You can act to change and control your life; and the procedure, the process is its own reward." - Amelia Earhart (1897 - missing 1937), American Aviation Pioneer and Author

"Choose your life's mate carefully. From this one decision will come 90 percent of all your happiness or misery." - H. Jackson Brown, Jr., American Author

"I found every single successful person I've ever spoken to had a turning point. The turning point was when they made a clear, specific unequivocal decision that they were going to achieve success. Some people make that decision at 15 and some people make it at 50, and most people never make it at all." - Brian Tracy (1944 - ), Canadian Self-help Author

"The biggest mistake that you can make is to believe that you are working for somebody else. Job security is gone. The driving force of a career must come from the individual. Remember: Jobs are owned by the company, you own your career!" - Earl Nightingale (1921 - 1989), American Motivational Speaker and Author

"Whatever course you decide upon, there is always someone to tell you that you are wrong. There are always difficulties arising which tempt you to believe that your critics are right. To map out a course of action and follow it to an end requires courage." - Ralph Waldo Emerson (1803 - 1882) American Philosopher and Poet

"Opinion is that exercise of the human will which helps us to make a decision without information." - John Erskine (1879 - 1951), American Poet

"Is a decision made in advance really any kind of choice?" - Wislawa Szymborska (1923 - ), Polish Poet, Nobel Prize in Literature

"If someone tells you he is going to make a "realistic decision," you immediately understand that he has resolved to do something bad. " - Mary McCarthy (1912 - 1989), American Author

"To solve a problem or to reach a goal, you don't need to know all the answers in advance. But you must have a clear idea of the problem or the goal you want to reach." - W. Clement Stone (1902 - 2002), American Businessman, Philanthropist and Self-Help Book Author

"Don't get involved in partial problems, but always take flight to where there is a free view over the whole single great problem, even if this view is still not a clear one." - Ludwig Wittgenstein, (1889 - 1951), Austrian-British Philosopher

"All progress is precarious, and the solution of one problem brings us face to face with another problem." - Martin Luther King Jr. (1929 - 1968), American Clergyman and Activist

"Leadership is the capacity to translate vision into reality." - Warren G. Bennis (1925 - ), American Scholar and Author

"Leadership is a combination of strategy and character. If you must be without one, be without the strategy." - H. Norman Schwarzkopf, Jr. (1934 - ), Retired United States Army General

"Management is efficiency in climbing the ladder of success; leadership determines whether the ladder is leaning against the right wall." - Stephen R. Covey (1932 - ), American Author

"A people that values its privileges above its principles soon loses both." - Dwight D. Eisenhower, 34th President of the United States

"There is only one boss - the customer. And he can fire everybody in the company from the chairman on down simply by spending his money somewhere else."- Sam Walton (1918 - 1992), Founder of Walmart


For even more quotes on other decision related topics click on one of the links below:


Return from Decision Quotes to Home