Small decisions that can lead to unexpected outcomes 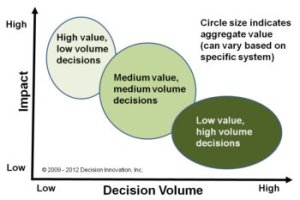 Large value decisions inherently suggest that the magnitude of the potential consequences will be high. However, as you move lower in a decision network, the number of small decisions being made increases in number, making it possible for the combined value of these small choices to exceed the value of the larger decisions. Is it possible that these smaller decisions can be made in a way that works against the benefits projected in a higher level decision?

This idea has been explored at numerous times throughout history, with one early example being attributed to Aristotle (384-322 BC) in his thesis, "Politics." Related thinking is conveyed in many areas of research including economics, sociology, psychology, computer science, game theory, philosophy, and logic. More recent and popular references include:

The problem with small decisions 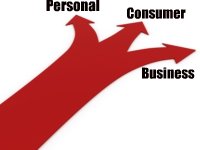 Collectively, small decisions can add up to big results. This happens in all our decision types: business, consumer and personal. The recent economic crisis is often attributed to the unintended consequences of millions of smaller decisions that resulted from changes in government policy and regulation. The sum of all these small choices led to a housing and debt bubble that, when burst, had far reaching disastrous consequences across multiple regional economies.

Inattention to smaller decisions, particularly where there is a bias or preference for a decision to be made in the same way, can lead to a large unexpected outcome. A particularly alarming case is characterized as the dilemma of the "tragedy of the commons," where small independent decisions based on apparent rational self interest lead to the depletion of a common resource that opposes everyone's long term interest.

The potential impact of many small decisions is supported with examples throughout historical literature. Here are some examples for our various decision types. 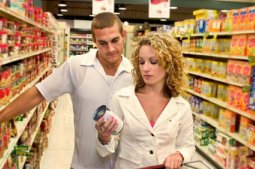 For community and government:

Recognize that the unexpected outcome of a collection of decisions can lead to a beneficial outcome as well. Problems help to bring focus to the unintended or unexpected nature of the consequences. The goal is to identify improvements to the decision making process to consistently achieve more outcomes that are intended.

What causes the problem?

Taking a systems thinking perspective can help reveal some of the possible causes for dilemmas resulting from small decisions. These include:

Estimates of daily decision making suggest that we make thousands of choices every day. Here are some ideas that can help prevent these small choices from creating unintended consequences and outcomes.