As the many forms of media entertainment have evolved over the last 20 years, making a game console comparison has correspondingly increased in complexity. Digital entertainment has become a staple of households with young adults, but as the technology found in our living rooms changes, the decisions we have to make surrounding our entertainment become increasingly difficult. No longer are we content to have a solitary DVD player as our sole means of entertainment. Now you can expect anything from a Digital Video Recorder (DVR) to a surround sound system or an Apple TV.

One of the most ubiquitous forms of entertainment these days is the video game console. The current console generation is about 4 years old. Once a niche form of entertainment, the purchase of game systems has exploded in recent years. This growth is still a work in progress, so the real question for those adding to their living room set-up is: What console do I buy? Though daunting, a game console comparison can help you manage a tough set of decisions and provide some fun in the process.

Focus your comparison with these decision criteria

Selecting appropriate criteria can simplify a difficult game console comparison. These parameters, gathered from avid gamers, will help to frame the decision so that the best solution is found.

Have some fun while evaluating the major alternatives

Now that we have uncovered the large categories involved in game console comparison, let us explore the alternatives and how to narrow the focus. The criteria above are primarily focused on the three main home consoles. So, the three main alternatives, or options, in this game console comparison are the major home consoles: PlayStation 3, Xbox360 and the Wii. These three consoles are battling for the consumers time, and their living room with the inclusion of various extra features.

Beyond the three major players, are there other alternatives? Well, those looking for a cheaper alternative to the current generation console could still purchase a PlayStation 2. The console is now almost 10 years old and does not offer the same online functionality and features of current consoles, but it does offer a massive library of games and enough compatibility with current televisions to make it a great choice for those looking for choice and a backlog of quality games. Beyond that, the PlayStation 2 also offers great savings for any consumer on a budget.

Maybe you do not consume your games through your television because you travel or prefer to use your living space for things other than games. In that case, other alternatives exist that should be part of your game console comparison. Portable consoles, such as Nintendo DS and Sony PSP, offer many of the same franchises, experiences, and even unique functionality like touch screens or MP3 playback. These portable consoles may also alleviate tough decisions related to compatibility with televisions and render the decisions about extra features irrelevant, especially if you just want to play games, and play them anywhere you happen to be.

What about retro alternatives?

What about the oldest gaming console, the PC? The PC for some is becoming the television as people use it to watch television programs as well as continue to play games. Those looking for their consoles to offer wide variety of functionality on top of playing games might find the PC is still the best option. Most of the features offered by consoles originated on the PC and still function the best in that space. The downside to the PC is the absence of some of the major game franchise players you find on consoles. Also, it is more difficult to set up a computer based entertainment system in a comfortable setting such as your living room, meaning you may not be able to take advantage of existing equipment such as a TV.

Finally, for those looking at a retro option in their game console comparison, those really old systems may run into problems. While these consoles may still work on your new high definition televisions, and they may still be viable if you want to play older, classic games, this alternative requires plenty of sacrifice. These consoles offer some of the most classic game experiences, but without any of the bells and whistles that come with the modern consoles. To complicate this already controversial alternative, many modern consoles offer the classic experience as digital downloads - and probably for much less money and hassle than you would experience with a classic console.

Now is the time to consider the related decisions 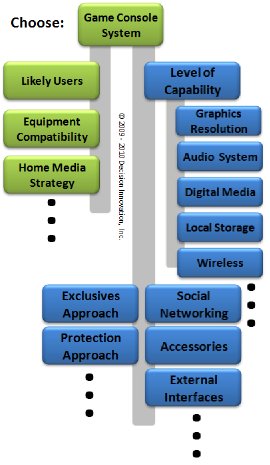 Why view your game console choice as a system? If you have a budget, now is the time to get a good understanding of what you might spend to get the gaming experience you want for you and your friends and family. You don't want to find out after you buy your game console that you need a high speed internet connection to play games as part of a social network. Also, it's important to think about how your game system will function as part of your overall home media capability (TV, sound system, network, storage, ...). Another important question that is part of your game console comparison is: What is your strategy for protecting your purchased digital content? You don't want to move all your media to digital formats and then have a hard disk crash cause you to lose it all.

Recognize that your game console selection sits in a network of related decisions that you have already made or may need to make in the future. A little thought now will help create a great gaming experience for everyone involved.

Seemingly a simple choice, the decision on what machine gets your time and living room space will benefit from a game console comparison. By considering a set of criteria, the choices that come with those criteria, and the alternatives, a decision can become manageable even in the face of several great options. With the right criteria in mind the pain of a lengthy and complex decision can be transformed into a great experience.